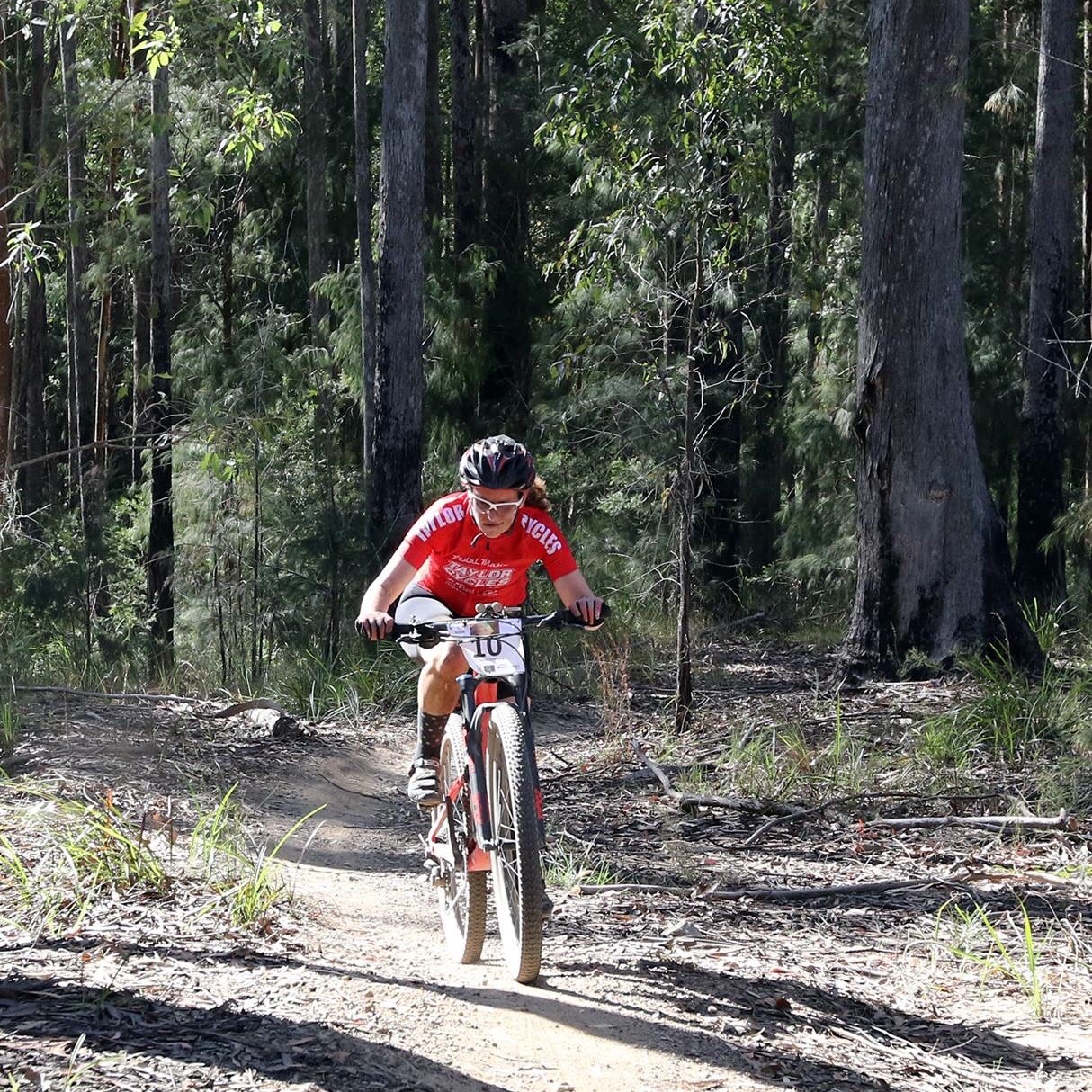 ‘Mistakes are the portals of discovery’

The Solo 24 hour mountain bike Championships were held on the weekend of the 15-16th September 2018 at Wauchope in New South Wales. The race was held in the Broken Bago State Forest and was under new management. The course was 12km long with 150 meters of climbing per lap. The course had a little of everything ranging from rocky fire roads to narrow and technical single track.

On arrival on Friday after a  7 hour trip complete with a toddler in tow we were greeted with a disorganised pit lane. Nobody knew where they were supposed to be camping and we ended up camping in the scrub around 1 km from race base and from the toilets. After clearing some smaller bushes/trees/sticks/glass/rubbish we set up. I was unable to do a lap of the course as there was a bush fire close by which was threatening to change direction and if it did so we would have to make a hasty retreat.

Saturday started off very dry and very dusty with temperatures reaching over 30 degrees centigrade which made conditions challenging. At  around 1am on the Sunday the winds had noticeably picked up and things were beginning to become a little scary. The race was halted at around 2am with gale force winds and falling trees in the woods with debris hitting several of the riders. I rode 248km in 16 hours before being stopped by marshals.

On reflection I stood on that podium in second place elite female (1 lap down from the reigning National Champion) with my shoulders back and my head held high. I had managed to fit training in around a hectic schedule, I had managed the symptoms of Fibromyalgia, I had managed to turn up to the start line on time with a working bike and more importantly I had set a a good example of good sportsmanship. I feel I proved to myself and everybody else that having a young child/family does not preclude females from participating towards the top of their chosen sport.

I realise now that this isn’t a single person sport and I have to try my hardest as I have many, many people invested emotionally and financially in me.

In the lead up to this race I had been consistently training putting in some good distances and slowly increasing the pace. At times I had been struggling to keep everything under control and was struggling with my time management. Juggling a toddler, work, caring for our pets, managing household tasks and the normal every day life stuff was becoming very challenging and at times just going out on the bike seemed impossible. I had attempted to ensure all equipment was well serviced and in good working order and that we had everything prepared ready to go.

The best laid plans do not always work out in the expected manner but this is where the true learning and improving occurs.

The following touches on some of the errors and what I have learnt from them:

1) Deciding the day before that I wanted to change the saddles between my bikes -  the seat post got completely stuck and I couldn’t remove it which meant a 40 minute round trip with a screaming toddler to the bike shop to get it fixed - I then got to the event and panicked that the saddle height felt too low so I began altering this. The end result was that bike number 2’s saddle height was too high and bike 1’s was a little too low which meant for uncomfortable  riding. The lesson is to not attempt to change anything so close to a race.

2) I failed to seperate myself from the social side of the event and was talking to people when I should have been resting and ensuring everything was ready to go. I could not get my brain to switch to race mode which meant I was out for a Sunday afternoon ride and not a race. I need to develop some strategies to get into race mode this may be listening to music and lying down until a set time to get onto the bike.

3) Starting out too slowly - at the previous 24 hour I had started far too quickly and paid for it towards the end of the race where I really struggled. This race I decided to go out very steadily however this meant I was easily lapped around 10 hours into race and became a little despondent knowing there was no way I would be able to pull that back. I think a pace in between too fast and too slow is ideal and maybe trying to stay with the other girls for as long as  possible would be better.

4) Lighting error judgement. I got this very wrong and it was fortuitous that this race was halted at 2am as I only had enough light for another hour of riding with my exposure light. I have additional batteries to go with the Exposure light however i assumed that when the battery from the light died I could plug another battery into it and it would keep running. Reading the instructions you have to have the spare battery plugged into the light when you first turn it on as it will slowly provide supplemental power to it. I wanted bright light so I started on program 1 on high which would have given 3 hours of power - i have 3 additional batteries (I assumed 12 hours of light!) this drained very quickly and I was having to change settings whilst out on track hence wasting time. I am now going to practice with either setting 1 on low or setting 3 on high with the spare battery already plugged in. My AyUp on my helmet was supposed to have provided 6 hours of power it cut out a long time before this and plunged me into darkness about a quarter of the way around the lap which was far from ideal. Lesson is to go and run all the batteries down and note when they stop working. I will also carry a spare battery in my pocket.

5) Excess equipment and food. I have been known to bring far too much additional equipment which I would never have cause to need during the race which made it virtually impossible to actually find anything which I needed in a hurry. I also bring too much food which I haven’t a hope of digesting and was often choking on what I was trying to eat. I ended up relying on fluid calories and not solid food supplemented with energy gels and electrolytes. The lesson here is being more organised, cutting down on excess baggage and trusting my calorie sources. In future I plan to continue with Hammer, Huma gels and electrolytes and not worry too much about trying to eat too much solid food apart from pizza (always goes down well!)

The lessons learnt will ensure that I can continue to improve with this sport. The next stop is Worlds in Scotland in 5 weeks time!