On many occasions I have completed the Brisbane Valley rail trail from Wulkuraka to Yarraman return and have also ridden sections of this trail with both family and friends.

Earlier in the year I also completed the Kingaroy to Kilkivan section. I had never ridden the link tracks and road between Yarraman and Kingaroy.

Each year through work I have to take three weeks of annual leave at Christmas time and for the past few years I have either had a very young child, been unwell or recovering from surgery.

This year I had been debating the ride for awhile and wondered whether it was actually manageable within a three day time period.

Leading up to the ride I was not overly planning for it and had been contemplating riding 10,000 vertical meters on Centre road. If the summer storms came over I could easily abandon my effort and retreat to my car.

The route was devised by Paul Elby.

A self supported bike packing adventure in Brisbane.

A 460km long trip with 10,000 meters of elevation with 80% being off road on either gravel or 4 wheel drive trails or single track.

Starting and completing at Mt Coot tha look out.

Commencing 5.30am on Saturday the 3rd October and finishing at 6pm on the 5th October 2020. 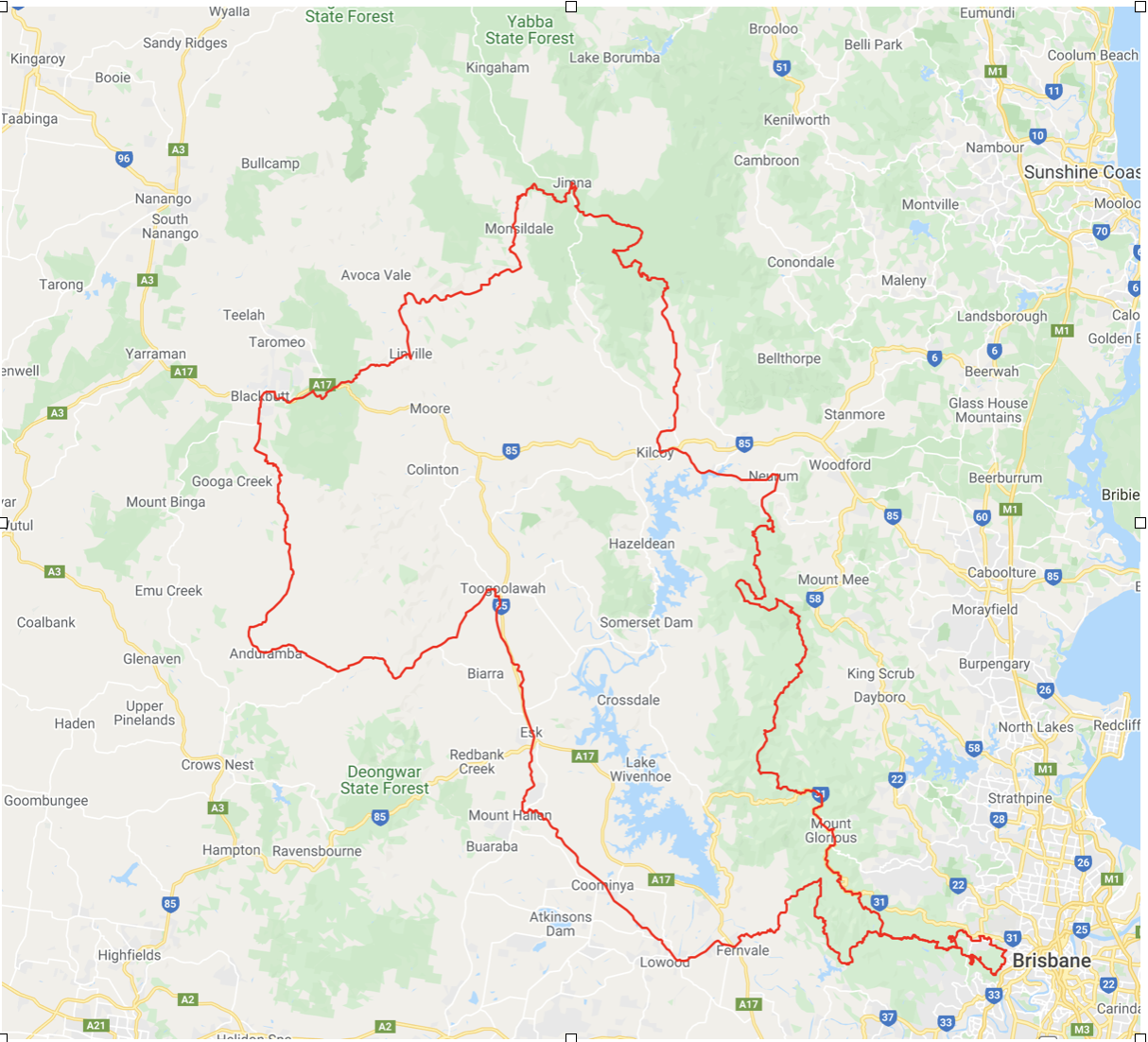 This year I was aiming to beat my lap number from last year and i was confident that this would be manageable as I was stronger, better prepared and had been training and racing well.

Then I got really sick about 6 weeks prior to the race. Hayley being in day care bought home with her bronchitis and then infected the entire family with it including my mum who then had to fly back to the UK. This resulted in 2 courses of antibiotics, 2 course of steroids and an ventolin Inhaler. The bronchitis then improved and left me the most severe case of sinusitis which I have ever had. The CT scan on the Friday before the race resulted showed obliterate  of the left sinus which a bacterial infection so back onto the antibiotics.

The night prior to the race I slept at the race venue but didn’t get much sleep as it was very noisy and the trailer was on a slope. I arranged every thing I needed and then relaxed until Tom appeared with Hayley and then it was going on the jumping castle, getting Hayley food and then colouring with Hayley instead of checking my bikes.

I took my bike for a warm up and noticed the brakes were rubbing, off came the back wheel, in went new pads and I noticed a small part of the brake pad had worn away. I made it to the start without a proper warm up.

I started well and managed to avoid the carnage in front of me as several people came down on dusty corners. I used the first 1/2 lap to warm up. It was hot at 39 degrees in the sun and took awhile to cool down.

By the 4 hour mark I was starting to feel unwell and when I changed bikes to get Tom to sort my lights out he advised that if i was feeling unwell then I should stop - Tom never offers me this option so its very unusual circumstances and he noticed something was very off. I managed to push through it, took some of the inhaler and eased back on the up hills and rode as fast as I could on the downs.

Then it got dark, Tom forgot to give me my headlight so I rode 1/2 the course on my handlebar light which is on the programme where it goes into power save mode if your going to slow - yes it was going onto power save mode at the most inopportune times such as down a very rocky section. Apart from that I think we have the light situation sorted out now.

I pushed on and on. I fell twice once when a stick got jammed into my wheel and sent me over the handlebars and the other time towards the end where i fell off the trail and down an embankment and a kind guy stopped and pulled me back up. I walked away from both with minor scratches and bruising and the bike survived.

By the 20th hour i came into pits and felt very unwell, dizzy, struggling to breathe. I sat down for a while ingested some food and fluids and didn’t fell any better. Tom said i should pack it in now and quit.

However the past 2x24hr races I’ve done I’ve never actually completed them. At the last Nationals the race was abandoned at 16 hours due to the wind and falling trees, another i stopped on medical advice with hypothermia).

I was determined not to quit a 3rd, I got back on rode steadily and was ok until the top of the long climb i had to stop and get off. I was dizzy, had double vision and couldn’t breathe properly. I managed to eat and drink and a kind rider stopped and gave me some sugar and put me back on my bike and stayed with for awhile to make sure i was ok he then informed Tom that I was coming back and didn’t feel too good.